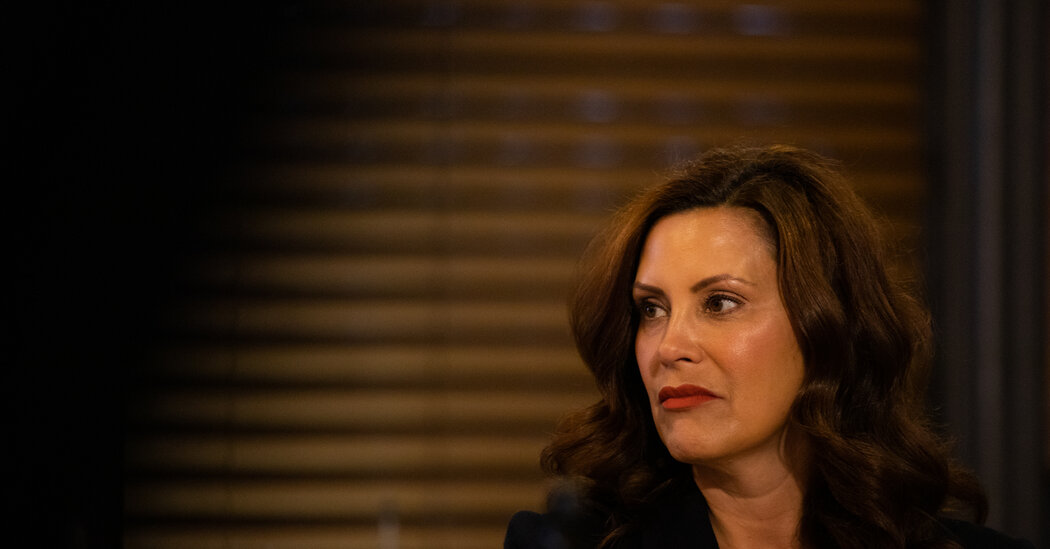 GRAND RAPIDS, Mich. — Four months after one of the most closely watched domestic terrorism trials in recent history ended with zero convictions, federal prosecutors are trying again to convince Michigan jurors that there was a plot in 2020 to kidnap Gov. Gretchen Whitmer, set off explosives and foment a civil war.

But to prove their case against the two defendants, Barry Croft and Adam Fox, prosecutors will have to persuade jurors to trust a sprawling F.B.I. investigation that embedded several federal operatives in the group, including an informant who was named second-in-command of a militia and an undercover agent who offered to provide explosives.

Building that trust was already hard, as jurors showed in April when they acquitted two men and failed to reach verdicts for Mr. Croft and Mr. Fox. But it may be more difficult at a time of even higher political tension, with Ms. Whitmer, a Democrat, campaigning for re-election and F.B.I. agents searching former President Donald J. Trump’s Florida home this week, a move that many Republicans have decried as a weaponization of the Justice Department.

“For the defense, this really is perfect timing for them, because their case is built around distrust of the F.B.I.,” said Matthew Schneider, who served as the top federal prosecutor in Eastern Michigan during Mr. Trump’s presidency and said he was involved in the early stages of the kidnapping plot investigation.

Christopher O’Connor, a prosecutor, told jurors on Wednesday that the men, who were upset about Covid-19 restrictions, had plotted a kidnapping raid on the governor’s vacation home, which they had scouted out on “reconnaissance missions.” They planned to detonate homemade explosives to take out a bridge and cut off the police response, he told jurors, just as prosecutors said in the first trial.

But Mr. O’Connor also veered from some of the themes of the previous trial, taking pains to note social media posts that the men made calling for political violence long before F.B.I. informants entered the case. He also defended the use of undercover agents, whose omnipresence and quantity are favorite defense talking points, and tried to head off claims that the men were entrapped.

“Entrapment is a legal standard — it’s not a feeling that you get about this investigation,” Mr. O’Connor said during opening arguments on Wednesday at the federal courthouse in Grand Rapids.

Defense lawyers went back to the themes that dominated their presentations in the first trial. They argued, essentially, that their clients were big talkers who said regrettable things but were never going to act out violently before undercover F.B.I. personnel pretended to befriend them. Both men are charged with kidnapping conspiracy and conspiracy to use a weapon of mass destruction, and could face up to life in prison if convicted.

“He’s lonely, he’s looking for connection, and they seize on it,” Christopher Gibbons, a lawyer for Mr. Fox, said of his client, who lived in the basement of the Grand Rapids-area vacuum shop where he worked.

Joshua Blanchard, a lawyer for Mr. Croft, a truck driver, blamed the government for luring his client from his home in Delaware to events in different Midwestern states where a plot was discussed.

“They’re doing everything they can to try to bring Barry into the fold of this group,” Mr. Blanchard said.

By focusing heavily on statements calling for violence made before the F.B.I. investigation began in earnest, as they did on Wednesday, prosecutors may be able to neutralize some of those arguments.

“That really takes the winds out of the sails of the defense, because the defense has this argument that this is all because of the F.B.I., this is all entrapment, the F.B.I. was behind all of this,” said Mr. Schneider, the former prosecutor, who is now a partner at Honigman LLP in Detroit.

Still, prosecutors may choose to shore up informant testimony with more supporting evidence than they would have previously, and may be more aware of skepticism of federal law enforcement, said Barbara McQuade, who served as the top federal prosecutor in Detroit during Barack Obama’s presidency.

“I think there was a time when prosecutors assumed that just because an F.B.I. agent said it was true, a jury would believe it,” Ms. McQuade, who now teaches law at the University of Michigan, said this week before the search at Mr. Trump’s home was publicly known. “And I think we live in a time when that is no longer the case.”

The investigation of the alleged plot, during the early months of the pandemic when Mr. Trump was president, was presented from the start as indicative of the rising threat of political violence and right-wing domestic terrorism. That threat became all the more clear on Jan. 6, 2021, after the arrests in Michigan, when pro-Trump rioters stormed the U.S. Capitol and tried to block the certification of the presidential election.

But even as two men, Ty Garbin and Kaleb Franks, pleaded guilty to kidnapping conspiracy in the Michigan case and agreed to testify, problems with the investigation were emerging. One F.B.I. agent was fired last year after being charged with domestic violence. Another agent, who supervised a key informant, tried to build a private security consulting firm based in part on some of his work for the F.B.I., according to a BuzzFeed News report.

Jurors did not hear the details of those incidents at the first trial this spring, and it seems unlikely that much of that will come up this time. There is also another elephant in the courtroom — the acquittals this spring of two former co-defendants, Daniel Harris and Brandon Caserta.

Defense lawyers mentioned Mr. Harris and Mr. Caserta by name on Wednesday but did not explicitly say that they had been acquitted. Prosecutors did not bring them up.