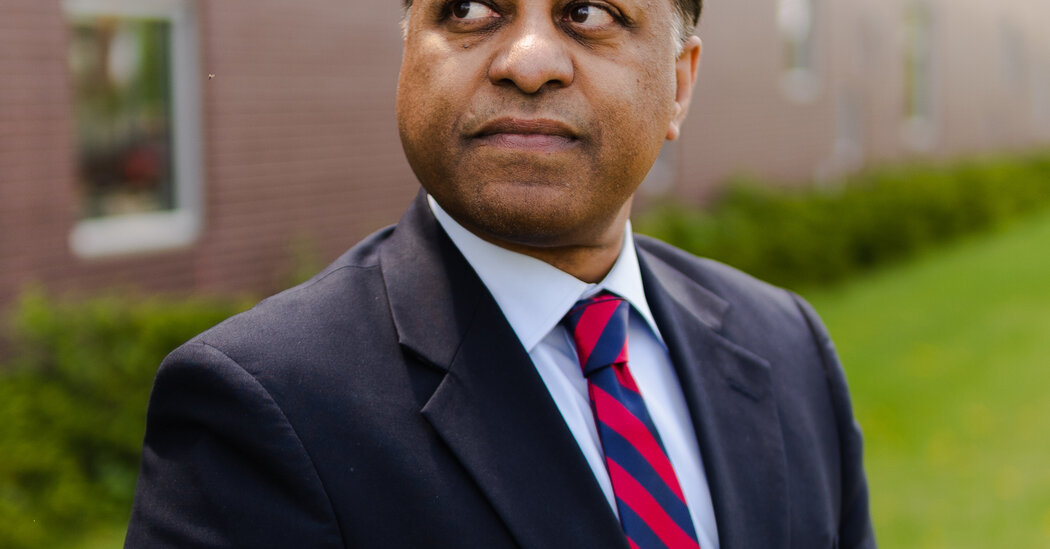 MANCHESTER, N.H. — During a recent interview here, Dr. Rahul Gupta, President Biden’s drug czar, appeared to be on the verge of supporting a radical shift in U.S. drug control policy.

Asked for his views on supervised consumption sites, where users bring their own drugs to take under the supervision of trained workers in case they overdose — a concept accepted in Canada and Europe but still technically illegal in the United States under federal law — Dr. Gupta’s eyes lit up. Then he paused, catching himself, and said he could not weigh in yet.

The Justice Department is expected to soon decide whether one planned site that it blocked three years ago can operate, giving more insight into the Biden administration’s views on the concept. Many public health experts believe it could help stem a record number of overdose deaths largely caused by synthetic fentanyl.

“All of us are enthusiastically waiting” for the department to weigh in, Dr. Gupta said.

Support for supervised consumption from the Biden administration would be a major turning point in how the government addresses an epidemic of addiction and overdoses that has endured for decades and now claims more than 100,000 lives a year. Instead of discouraging drug use, such sites aim to keep users from dying, with trained personnel providing syringes and other sterile equipment for using drugs and working to reverse overdoses on the spot.

Dr. Gupta is already overseeing what experts describe as the most progressive federal drug strategy since his office’s inception.

The strategy largely rests on the concept of harm reduction, focused not on helping drug users achieve abstinence but on lowering their risk of dying or acquiring infectious diseases. A central piece is providing sterile needles to use in injecting drugs, tools to check drugs for fentanyl and other lethal substances, and naloxone, a medication that can revive people who have overdosed. Mr. Biden is the first president to support the approach.

“It’s late by, I don’t know, a few decades,” Alex Kral, an epidemiologist and drug policy expert at RTI International, a nonprofit research organization, said of the White House support for the approach.

The administration has said it aims to reduce overdose deaths by 13 percent by 2025. Without more harm reduction interventions, Dr. Gupta said, 165,000 people could fatally overdose each year by 2025.

Dr. Gupta, in the eyes of some addiction experts, is an unlikely flag-bearer for the strategy. Just four years ago, he was blamed for the demise of harm reduction programs in Charleston, W.Va., after he signed off on a report criticizing one heavily used site, leading to its decertification.

He now says the closure of the Charleston program was a significant mistake; in an interview, he emphasized that he had supported more than a dozen harm reduction programs in West Virginia when he was overseeing public health there.

Dr. Gupta describes fentanyl — not the pharmaceutical kind, but a synthetic version produced in illicit laboratories, often in Mexico — as a “Pandora’s box” in the nation’s drug supply. Because it is strong and sold in varying formulations, small differences in quantity can mean the difference between a drug user’s usual dose and one that is deadly. It is often combined with stimulants like methamphetamine and cocaine, or pressed into counterfeit prescription pills offered not only to chronic drug users but to experimenting teenagers.

A recent study of illicit pills seized by the drug enforcement authorities found that a substantial share of pills marketed as OxyContin, Xanax or the attention deficit hyperactivity disorder drug Adderall now contain fentanyl. Xylazine, an animal tranquilizer that can have harsh effects on humans, has also recently played a role in a greater share of overdose deaths.

Naloxone, a medication invented in the 1960s that can quickly reverse opioid overdoses, took many years to come into mainstream use in the United States, with federal agencies reluctant to study and fund its use until the last decade, experts said. The F.D.A. approved the first generic naloxone nasal spray only in 2019. Syringe exchanges, now available in roughly 40 states, were also slow to gain broad acceptance.

Naloxone is now fundamental to the nation’s efforts to curb overdose deaths. Observing a naloxone training session at an architecture firm in New Hampshire that keeps the medication on site, Dr. Gupta observed that he had grown familiar with the dummies used for such demonstrations.

The goals laid out by the drug control office show how much it has evolved since 1988, when it was created to strive for a “drug-free” America. Its early leaders had backgrounds in law enforcement, leading to more attention to drug trafficking than addiction.

More recent drug czars have shied away from law-and-order atmospherics and emphasized addiction; one of Barack Obama’s picks for the job, Michael Botticelli, was himself a former drug user.

Dr. Gupta is the first medical doctor to occupy the role, after serving as the health commissioner in a state — West Virginia — that has consistently had one of the highest rates of overdose deaths in recent decades.

Dr. Dan Ciccarone, a professor of family and community medicine at the University of California, San Francisco, said that Dr. Gupta’s arrival at the White House was the culmination of the shift from the moralistic debate around drugs, blaming suppliers and users, to an approach treating the issue as a health crisis, with acceptance of drug use.

“It became a clinical problem that should be handed over to the doctors,” he said. “This is the anti-shame approach: ‘We love you; we’re concerned about you; let’s help you be ready.’”

Dr. Gupta is still trailed by accusations that by condemning the Charleston needle exchange with the audit that he and his colleagues there issued in 2018, he had undermined the progress West Virginia had made in implementing harm reduction programs. A large H.I.V. outbreak among people who inject drugs — and a scathing C.D.C. report — followed.

State legislators piggybacked on the report last year and passed a bill that severely restricted how syringe exchange programs could operate, calling for identification and the return of used needles — both deterrents to the drug users the programs are intended to help, experts said. It also threatened penalties for sites that did not comply with the new regulations.

“There were a number of counties set to open programs that then didn’t,” said Joe Solomon, the founder of Solutions Oriented Addiction Response, or SOAR, which ran a syringe exchange program in Charleston. “They couldn’t afford that opposition in their communities.”

Mr. Solomon said that Dr. Gupta was now benefiting from a more comfortable political environment in which to promote harm reduction, with “a resurgence of research and momentum” behind it.

Dr. Ciccarone, who pushed Dr. Gupta to more vocally support harm reduction after the Charleston syringe exchange was shut down, called him “reformed.”

Earlier in his career, Dr. Gupta practiced medicine in Alabama and at a safety net hospital in Nashville, experiences he said had illuminated the social and economic causes of addiction, especially among the poor.

Even now, Dr. Gupta said, many states and cities are only just beginning to have conversations about the benefits of harm reduction. Naloxone can be expensive and hard to find in some parts of the country, he said; in a recent analysis of overdose deaths in 2019 and 2020, the Centers for Disease Control and Prevention found that naloxone had been administered in only about 20 percent of the cases. He is now talking to Food and Drug Administration regulators about allowing naloxone to be sold over the counter, which could improve access and affordability.

He has talked up harm reduction this year in Salt Lake City and in Kentucky, where local health departments across the state have taken up syringe exchange programs.

There are now more than 80 such programs statewide, said Van Ingram, the director of Kentucky’s drug control policy office, pointing to it an example of bipartisanship in harm reduction policymaking. Local health officials, he added, “had to take the uncomfortable positions with the same people they stand in line with at Kroger.”

During a visit to Maine’s state prison this month, Dr. Gupta praised a medication treatment program for opioid addiction, another facet of harm reduction efforts that addiction experts say is critical to stemming overdoses among the incarcerated and after release.

As fentanyl continues to pummel communities, Dr. Gupta says that the Biden administration has adopted a consider-everything attitude. It has moved to loosen restrictions on prescribing buprenorphine, an anti-craving drug. Fentanyl test strips, which can now be purchased with federal grants, are one tool that should be more widely adopted, Dr. Gupta said, citing cocaine users as an example of who might benefit.

“They don’t know there’s a new contaminant in this,” he said. “And then they’ll die. Is that fair? Is that right?”

A Justice Department decision on supervised consumption — tied to the Philadelphia case — could allow sites to function without fear of interruption by federal authorities. The resolution could also give the White House an opening to publicly endorse the option.

“The Department is evaluating supervised consumption sites, including discussions with state and local regulators about appropriate guardrails for such sites, as part of an overall approach to harm reduction and public safety,” a Justice Department spokeswoman said in a statement.

Dr. Gupta cautioned in interviews that research on supervised consumption sites in the United States was practically nonexistent, as the first authorized sites opened just last November. A 2021 review of 22 studies from other countries found that such sites “may reduce the risk of overdose morbidity and mortality and improve access to care while not increasing crime or public nuisance to the surrounding community.”

Many Republican governors and state legislatures in recent years grew more receptive to needle exchanges and naloxone as overdose deaths reached once-unthinkable levels. The Trump administration also supported them, as well as medication-assisted treatment, in which users receive less potent opioids under medical supervision to ward off withdrawal symptoms and stanch cravings.

Yet some lawmakers still express discomfort with harm reduction tools, not least fentanyl strips, which are gaining acceptance even in some conservative states but remain illegal in others. A recent uproar about so-called “crack pipes” in a harm reduction grant program showed how the idea still faces deep pockets of resistance and can be weaponized politically. Supervised consumption sites remain a particular lightning rod.

Advocates of harm reduction say that Dr. Gupta still needs to push for more federal grants for such programs and that lawmakers should remove a restriction on using federal money to purchase syringes for needle exchanges.

The first federal grants for harm reduction groups, a $30 million program funded by the American Rescue Plan, were a far cry from what is needed to keep organizations afloat, experts said. Not receiving a grant “means we all dedicate a lot of time that could be spent on way more impactful work fund-raising for the long list of supplies we can’t use state or federal funds for,” said Lauren McGinley, the executive director of the New Hampshire Harm Reduction Coalition.

Jessica Parnell, who oversees a syringe exchange program in Nashua, said her group relies on charity gaming funds to afford the number of syringes she needs to meet demand. Her group expanded the number of days on which it serves people each week and started offering glassware in safer smoking kits.

“It’s taken off,” she said. “We’re reaching populations we haven’t before and offering an alternative to injection, which is safer.”

Kellene Mulcahy operates a harm reduction program out of the trunk of her car in Manchester, with an expanded arsenal she offers to members of the community: sterile water and clean cookers to dissolve illicit drugs, tourniquets and syringes to inject them, condoms, Band-Aids and fentanyl test strips, among other items, she said. The more local and flexible the operation, she said, the better the odds of people returning to it.

“They want to be human beings,” she said, “regardless of the decisions they’re making.”