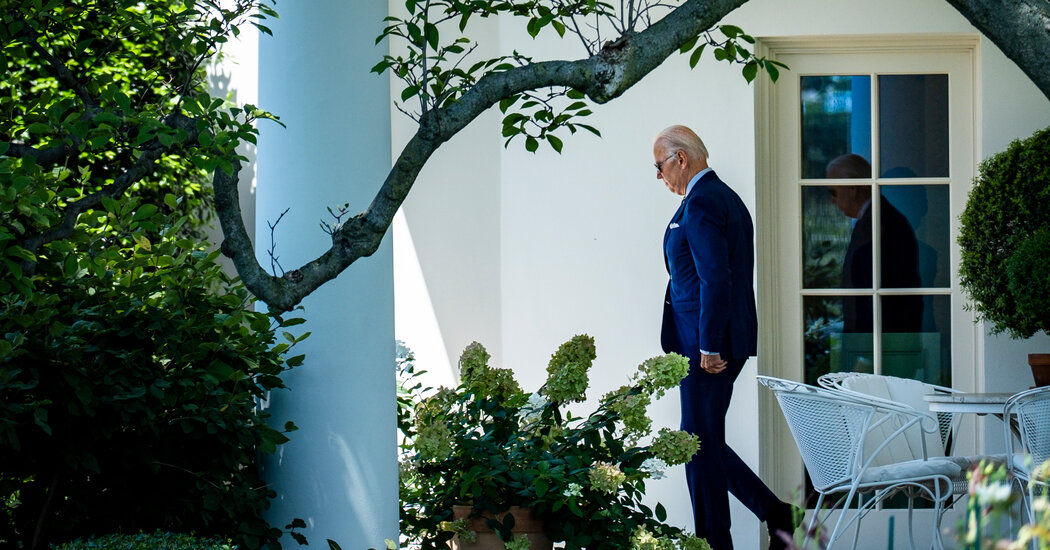 After more than a year of trying — and failing — to pack much of President Biden’s domestic agenda into a single tax-and-spend bill, Democrats appear to have finally found a winning combination. They’ve scrapped most of the president’s plans, dialed down the cost and focused on climate change, health care and a lower budget deficit.

As soon as party leaders announced that new bill last week, Republicans began attacking it in familiar terms. They called it a giant tax increase and a foolish expansion of government spending, which they alleged would hurt an economy reeling from rapid inflation.

But outside estimates suggest the bill would not cement a giant tax increase or result in profligate federal spending.

An analysis by the Joint Committee on Taxation, a congressional nonpartisan scorekeeper for tax legislation, suggests that the bill would raise about $70 billion over 10 years. But the increase would be front-loaded: By 2027, the bill would actually amount to a net tax cut each year, as new credits and other incentives for low-emission energy sources outweighed a new minimum tax on some large corporations.

That analysis, along with a broader estimate of the bill’s provisions from the nonpartisan Committee for a Responsible Federal Budget, suggests that the legislation, if passed, would only modestly add to federal spending over the next 10 years. By the end of the decade, the bill would be reducing federal spending, compared with what is scheduled to happen if it does not become law.

And because the bill also includes measures to empower the Internal Revenue Service to crack down on corporations and high-earning individuals who evade taxes, it is projected to reduce the federal budget deficit over a decade by about $300 billion.

Adding up the headline cost for what Democrats are calling the Inflation Reduction Act is more complicated than it was for many previous tax or spending measures that lawmakers approved. The bill blends tax increases and tax credits, just as Republicans did when they passed President Donald J. Trump’s signature tax package in 2017. But it also includes a spending increase meant to boost tax revenues and a spending cut meant to put more money in consumers’ pockets.

Maya MacGuineas, the president of the Committee for a Responsible Federal Budget, said the composition of the deal was vastly different from a larger bill that Democrats failed to push through the Senate in the fall. It included several spending programs that were set to expire after a few years, and budget hawks warned that the overall package would add heavily to federal debt if those programs were eventually made permanent, as Washington has been known to do, without offsetting tax increases.

Ms. MacGuineas called the original idea, known as Build Back Better, “a massive gimmicky budget buster.” She had kinder words for the new package, saying it “manages to push against inflation, reduce the deficit, and, once fully phased in, it would actually cut net spending, without raising net taxes.”

“That is a pretty monumental improvement,” she added.

The bill springs from an agreement between Senator Chuck Schumer of New York, the majority leader, and Senator Joe Manchin III of West Virginia, a key centrist Democrat. President Biden blessed it last week, and it carries what remains of what was once his $4 trillion domestic agenda.

‘Build Back Better.’ Before being elected president in 2020, Joseph R. Biden Jr. articulated his ambitious vision for his administration under the slogan “Build Back Better,” promising to invest in clean energy and to ensure that procurement spending went toward American-made products.

A two-part agenda. March and April 2021: President Biden unveiled two plans that together formed the core of his domestic agenda: the American Jobs Plan, focused on infrastructure, and the American Families Plan, which included a variety of social policy initiatives.

The Infrastructure Investment and Jobs Act. Nov. 15, 2021: President Biden signed a $1 trillion infrastructure bill into law, the result of months of negotiations. The president hailed the package, a pared-back version of what had been outlined in the American Jobs Plan, as evidence that U.S. lawmakers could still work across party lines.

A surprise deal. July 28, 2022: In a reversal, Mr. Manchin agreed to a deal to include hundreds of billions of dollars for climate and energy programs and tax increases in a package to subsidize health care and lower the cost of prescription drugs. The package’s climate proposals would be the most ambitious climate action ever taken by Congress.

Its centerpiece is a package of measures meant to fight climate change by encouraging transitions to lower-emission sources of energy, along with expanded health insurance subsidies and a move to reduce prescription drug costs for seniors by allowing Medicare to negotiate the prices.

Over a decade, the centerpiece provisions of the deal include about $68 billion in net tax increases, according to the Joint Committee’s modeling. The bill would impose a new 15 percent minimum tax on corporations that report a profit to shareholders but use deductions, credits and other preferential tax treatments to reduce their effective tax rate well below the statutory 21 percent. It would also narrow the benefits of the so-called carried interest tax provision, which largely benefits high earners who work in private equity and other parts of the financial industry.

The Joint Committee estimates those provisions would raise about $326 billion over a decade in new tax revenue. That’s a tax increase on companies that take advantage of current tax law, even though Democrats like Mr. Manchin and Mr. Schumer insist that it is not.

Much of that increase would be offset, overall, by tax credits for clean-energy initiatives such as electric vehicle purchases, renewable electricity generation and other carrots meant to reduce the fossil fuel emissions driving climate change. That would amount to tax cuts for some people, companies and electric utilities.

Since the deal was announced, Republicans have attacked it as classic tax and spending — the same terms they have used to deride much of Mr. Biden’s agenda. Last weekend, Republican senators released a companion analysis from the Joint Committee that they said was proof the entire bill would raise taxes on the middle class, though it did not actually show middle-class Americans would pay more taxes under the plan.

The Joint Committee’s analysis, released by Republicans on the Senate Finance Committee, found that the new minimum tax for corporations would result in higher effective tax rates for Americans up and down the income spectrum. The bill would not raise taxes on middle-income people; the main tax increase in the analysis would fall on corporations, not individuals. But the Joint Committee’s estimates assume that higher corporate taxes fall in part on the shoulders of workers, whose wages fall as their employers pay more, and Republicans portray that change as a tax increase.

“The Democrats’ approach to tax reform means increasing taxes on low- and middle-income Americans to fund their partisan Green New Deal,” Senator Mike Crapo of Idaho, the top Republican on the Finance Committee, said in releasing the analysis.

Republicans also released another Joint Committee analysis showing that the new corporate minimum tax would burden manufacturers. Democrats fired back with a Joint Committee analysis of their own on Tuesday, showing that about half the tax burden on manufacturers would fall on tech, apparel and pharmaceutical companies — which they said had long benefited from tax evasion techniques.

“These companies are playing the most games, and avoiding tax by manufacturing their drugs, phones and shoes abroad,” Senator Ron Wyden of Oregon, the chair of the Finance Committee, said in a news release.

The spending side of the bill has shrunk drastically from Mr. Biden’s initial ambitions, which included large investments in home health care, universal prekindergarten, community college tuition, and an array of other measures meant to help workers and students.

The current deal has stripped that spending down to what appears to be somewhere north of $100 billion in climate programs — the exact amount is unclear because the Joint Committee and the Congressional Budget Office have not published a full accounting of the bill’s provisions — and about $100 billion in additional health care spending. That includes three years of enhanced subsidies for people to buy insurance through the Affordable Care Act.

It also includes more money for I.R.S. enforcement, which the Congressional Budget Office projects would more than pay for itself, bringing in more than $100 billion in net additional tax revenue over a decade as the agency became better able to collect the taxes that people and companies already owed.

The Committee for a Responsible Federal Budget estimates that almost all of that spending would be offset over a decade by reductions in federal health care spending spurred by the bill, including the centerpiece effort to allow Medicare to negotiate drug prices.

Both the committee and the University of Pennsylvania’s Penn Wharton Budget Model project that over a decade, the total effect of those changes would reduce federal budget deficits. The committee estimates the savings at just over $300 billion but says they could be even greater if the I.R.S. crackdown works better than the Congressional Budget Office expects. Penn Wharton pegs the deficit reduction at about $250 billion.

Mr. Trump’s tax cuts also contained a mix of tax cuts and tax increases, but with a much different bottom line for the debt. It reduced a wide range of individual and corporate income tax rates, among other tax cuts, while eliminating or capping some tax preferences, like a deduction for paid state and local taxes that the law limited to $10,000 a year.

Some of those tax changes would have been significant tax increases on their own, like eliminating the personal exemption for individual income tax filers. But taken together, they added up to a large tax cut, which the Joint Committee initially estimated at $1.5 trillion on net.